Aiming to determine the number of P25 Phase 2 voice channels which could be supported in a Tornado radio backhaul system, Mimomax worked with a series of measurements captured from Tait Communications’ trunking system.

Packet captures from Voice and Site Controller Traffic were recorded and Mimomax then carried out the analysis to determine the number of P25 Phase 2 channels which could be supported in a Mimomax backhaul/linking system.

The key change brought about by the introduction of Phase 2  was the use of 2-slot TDMA for traffic channels.  This update means that two channels are supported at the same time on one 12.5kHz RF channel using a lower rate vocoder. This effectively doubles a traffic channel’s capacity to two simultaneous conversations.

Based on the recorded measurements, Mimomax found that P25 Phase 2 is 2.5 times more efficient than Phase 1.  Allowing for close to 50kbps of residual bandwidth for control or management traffic, the chart below outlines the number of channels a Mimomax Tornado radio system can support for P25 Phase 2. 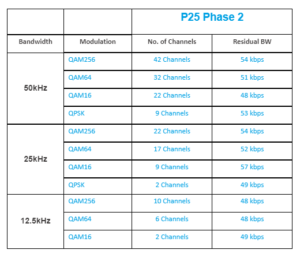 Note 1: If you do not require residual bandwidth for control or management traffic, the number of channels can be increased.

Note 2: Our measurements included Robust Header Compression (RoHC) which compresses the header only but leads to an approximate 33% reduction in overall packet size.

It is important to note some voice systems are highly sensitive to jitter. When running other traffic in parallel with VoIP, it can disturb the latency. However, Mimomax has a proprietary High Priority Queue (HPQ) system within our Quality of Service which ensures jitter is the lowest offered by any radio in the narrowband market.  Combined with the ability to both honor and assign traffic priority, these features ensure superior performance and reliability for mission critical voice applications